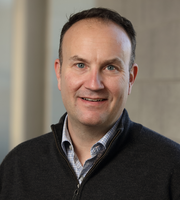 The discovery of the Higgs boson in 2012 was an important breakthrough in understanding the tiniest building blocks of our universe. Since then, the focus has shifted to measuring the properties of the Higgs boson in order to determine if this new particle is consistent with our current best model of the fundamental world -- or something much more exotic. The most crucial characteristic to be measured is the interaction strength between the Higgs boson and the most massive of the known fundamental particles -- the top quark.

Researchers at the CMS Experiment operating at the Large Hadron Collider have recently made the first observation of the interaction between the Higgs boson and the top quark. The effort was led by UVa Physics faculty member Chris Neu, who is an international expert in Higgs boson and top quark physics. He and his students and postdocs have been pursuing this elusive top-Higgs signature since 2011, including recent UVa PhD recipient John Wood ('15), current PhD student Evan Wolfe and postdocs Sarah Boutle, Tutanon Sinthuprasith and Ben Tannenwald. Many undergraduates contributed to background studies as well, including Eric Culbertson ('17), Gage DeZoort ('18), Catherine Jones ('15), Andrew Orvedahl ('18), Rachael Sproule ('17), and Chris Wiens ('17).

The article was recently published in Physical Review Letters here [1] and the result is discussed as the PRL Editor's Recommendation [2], as well as in the Fermilab News here [3] and Symmetry Magazine[4].