A Brief History of the Physics Department

At the end of the nineteenth century, the first dawn of modern physics, Llewellyn Hoxton was an undergraduate at the University of Virginia, studying physics under Professor Francis H. Smith. At that time, the Rouss Physical Laboratory was nearing completion at the south end of the Lawn, the new Rotunda still under construction at the upper end. The Rouss was one of the buildings replacing the burned down northern extension of the old Rotunda. Hoxton and his brother Archie lived in the home of Professor Echols on East Lawn.

Hoxton went on to do graduate work at Johns Hopkins, and returned to Virginia in 1906 as an adjunct professor (equivalent to the modern assistant professor). The following year Professor Smith retired, and young Hoxton was the only physics professor at Virginia for several years, although there were some instructors. Hoxton proved to be a brilliant teacher and created memorable lecture demonstrations. Students even brought their dates to the Saturday lectures. President Colgate Darden said of Professor Hoxton: “I remember with greatest pleasure my student days under him. He was one of the greatest teachers I have ever known, loved by all of us who studied under him.” Hoxton dramatically expanded the syllabus, introducing not only electricity and magnetism, but also X-rays and electrons, recent discoveries that were causing great excitement. In what little spare time he had, he completed his thesis and gained the Ph. D. from Hopkins in 1916.

The first major physics discovery at Virginia was in 1923, when graduate student Jesse Beams attempted to measure the rapidity of the photoelectric effect—when light falls on certain metals, electrons are emitted. The question was: is there a delay time between when the light hits the metal and when the electrons begin to shoot out? The standard theories predicted a substantial delay, the new quantum theory predicted none. Beams established that if there was a delay, it was shorter than three billionths of a second, a far shorter time than was predicted by the old physics. The old theory was wrong. This classic experiment is still quoted in standard textbooks on quantum physics.

In the fall of 1928, Beams returned to Virginia as an associate professor. His interest was in centrifuges, possibly because as a youth on his family farm in Kansas he had operated the cream separator. He developed the centrifuge far beyond what anyone else had ever done, and when it became necessary to separate uranium isotopes for the Manhattan Project, the Rouss Building, containing Beams’ latest centrifuge, was placed under armed guard. (Although actually Beam’s method was not used for the first bombs—an immense diffusion plant was used instead. But his method is much more economical and is now the standard.) Beams later used his rotational technology to measure the universal gravitational constant more accurately than all previous efforts.

Llewellyn Hoxton held the chairmanship of the Physics Department from 1906 to 1948, a record unlikely to be equaled. Jesse Beams was chairman from 1948 to 1962. By the end of the war, the Rouss Building was in poor repair, and no longer adequate for the expanding Department. Plans were developed to construct a new building in two phases connected to Rouss, going down the hill away from the Lawn on the east side. By 1949 the plans were ready, but the state allotment was not even sufficient for the first phase. Fortunately, an alumnus, John Lee Pratt, intervened, offering $500,000 in GM stock to endow a chair and to subsidize research provided that the state build the whole building. The state agreed to go ahead but moved the site away from the Lawn to the present location near the Engineering School.

Beginning in the early fifties there was a gradual buildup of the faculty, made possible by the new building, the Pratt money, and increasing federal support for research. Chemistry professor Alan Gwathmey met an expatriate Spanish condensed matter physicist, Nicolas Cabrera, in Paris in 1952. Gwathmey and Beams persuaded the president to offer Cabrera a job. He came here as an associate professor, and in fact succeeded Beams as chairman in 1962. Dr. Cabrera had been a research associate in Bristol, England, and this connection led to two important appointments. Dr. John Mitchell came from Bristol to Virginia in 1959. He has made fundamental contributions to the understanding of the photographic process. Another recruit from Bristol was Dr. Alan Batson, who set up a computer science center in the physics basement in 1962. The center was later moved to the basement of Gilmer Hall and grew to become ITC. Robert Coleman majored in physics here in 1953, continuing on to a Ph. D. in condensed matter physics in 1956. After two years in the Research Department of General Motors, he joined the faculty here in 1958, advancing to full professor by 1964. In 1963, Doris Wilsdorf (Ph. D. Göttingen, 1947, in solid state) was given a joint appointment with the Physics Department and the Engineering School, where her husband Heinz was chairman of the new Materials Science Department.

By the early sixties it was evident that a fully-fledged physics department also needed strength in nuclear physics. Much of the basic nuclear research at that time was conducted in national facilities such as Los Alamos (New Mexico) and Oak Ridge (Tennessee), so those were the natural places to look for new faculty. Morris Rose, a leading nuclear and atomic theorist, was hired from Oak Ridge in 1961. An experimentalist, Rogers Ritter, was also recruited from Oak Ridge in 1961. In 1963, a major commitment was made to nuclear physics: a new laboratory was constructed on Observatory Hill with National Science Foundation money.

In the late sixties, the Department expanded rapidly, fueled by the post-Sputnik federal largesse for research and student support. Cabrera was chairman until 1967, when he was followed by Judah Eisenberg, a nuclear theorist. In 1974, Judah Eisenberg decided to emigrate to Israel, and Dean Cross appointed Hugh Kelly Chairman of Physics. Kelly was Chairman for four years.

Bob Coleman was Chairman from 1978 to 1983. Joe Poon was hired as an assistant professor in 1980, Blaine Norum in 1981. Norum immediately began work with McCarthy designing a new particle accelerator, in competition with groups all over the country: they beat out the national laboratories and won the national competition for accelerator design in 1982. The large amount of money brought into the state by their project, called CEBAF (Continuous Electron Beam Accelerator Facility, now known as the Jefferson Lab) caused Richmond to see the Physics Department in a new light. State money suddenly became available to hire nuclear and particle physicists into two new organizations: the Institute for Nuclear and Particle Physics and the Commonwealth Center. This influx of funds and positions was to significantly change the composition of the Department.

In the following years, the Department expanded further with the build-up of the high-energy group, and continues to grow, the newest addition being the Gravity & Cosmology group. 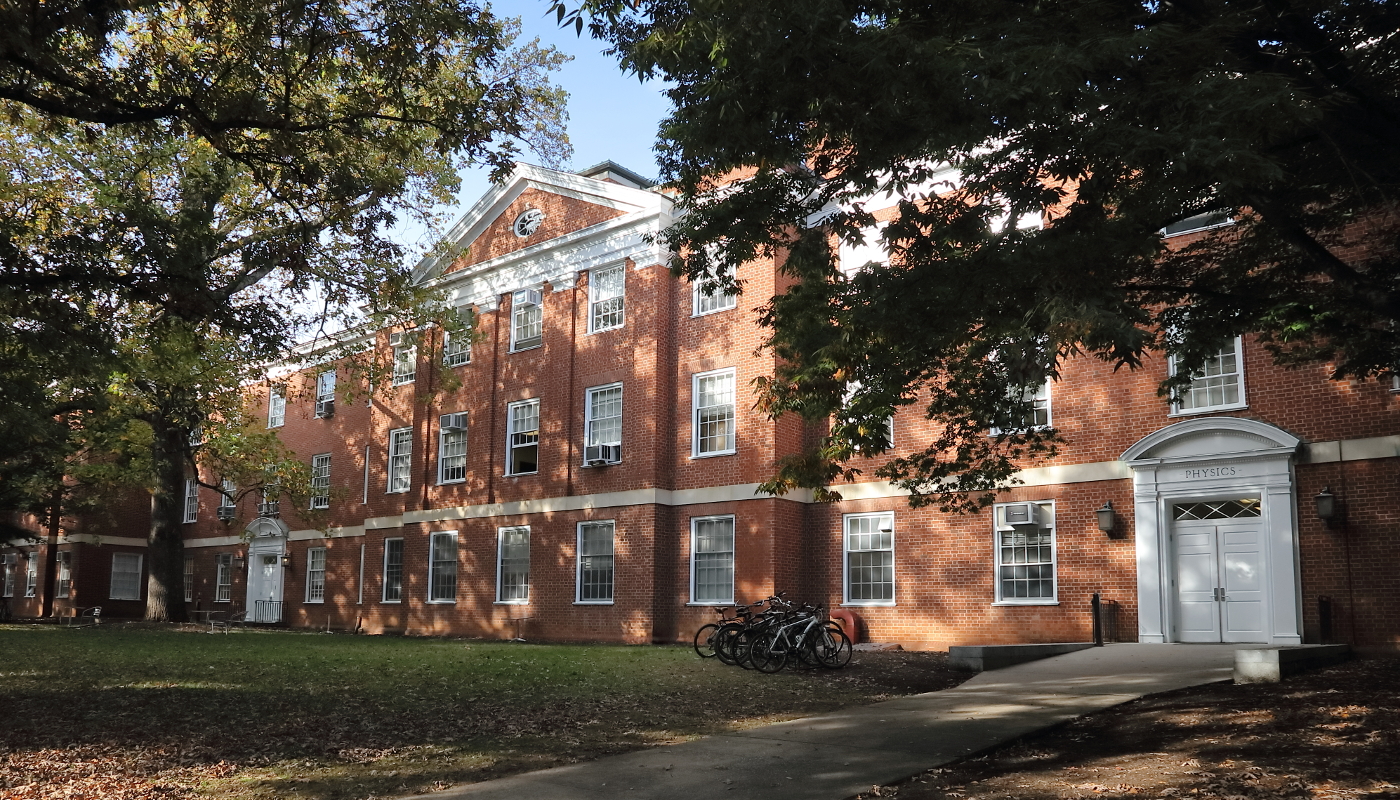 The Jesse Beams Lab, as it currently appears